Photos and History of her Most Lavish Tiaras – WWD


One of the many hallmarks of Queen Elizabeth II’s reign has been the vast collection of extravagant tiaras she’s worn over her 69 years on the throne.

Many of the queen’s tiaras have been in the British royal family for more than a century, with some headpieces commissioned by the queen’s grandmother, Queen Mary, from the House of Garrard.

Two of the queen’s most frequently worn tiaras were passed down to her by her grandmother: the Girls of Great Britain and Ireland Tiara, which Queen Elizabeth is seen wearing on certain issues of British banknotes, and the Queen Mary Fringe Tiara, which the queen wore to her wedding to Prince Philip in 1947.

Queen Elizabeth in the Girls of Great Britain and Ireland Tiara in 1970 and in the Queen Mary’s Fringe Tiara in 2008.

While the queen, who turns 95 today, generally sticks to a few tiaras from her collection, she’s lent out several pieces to her granddaughters and granddaughters-in-law, including Princess Eugenie, the Duchess of Cambridge, Kate Middleton and Meghan Markle, all for their royal weddings over the last decade.

In honor of the queen’s 95th birthday, WWD takes a look at some of the tiaras and the significance behind them. Read on to learn more about the queen’s lavish tiara collection and click through the above gallery to see photos of the queen from the Fairchild Fashion archives. 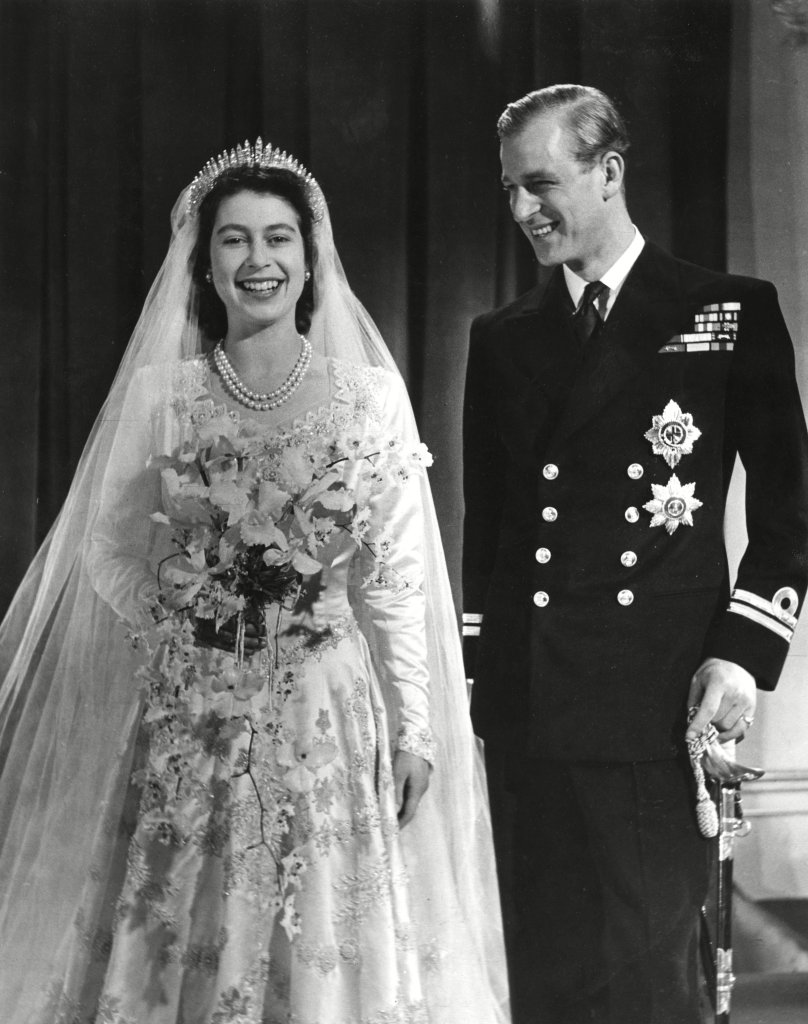 The then-Princess Elizabeth and Prince Philip at their royal wedding in 1947.
Historia/Shutterstock

Queen Mary lent her granddaughter, then Princess Elizabeth, her fringe tiara made by the House of Garrard in 1919 for her royal wedding to Prince Philip in 1947. The tiara features 47 delicate bars of diamonds.

According to the House of Garrard, the tiara snapped on the day of Queen Elizabeth’s wedding as she was getting ready for the ceremony. A police escort transported the tiara to the jeweler’s workshop where it was mended just in time for the wedding. 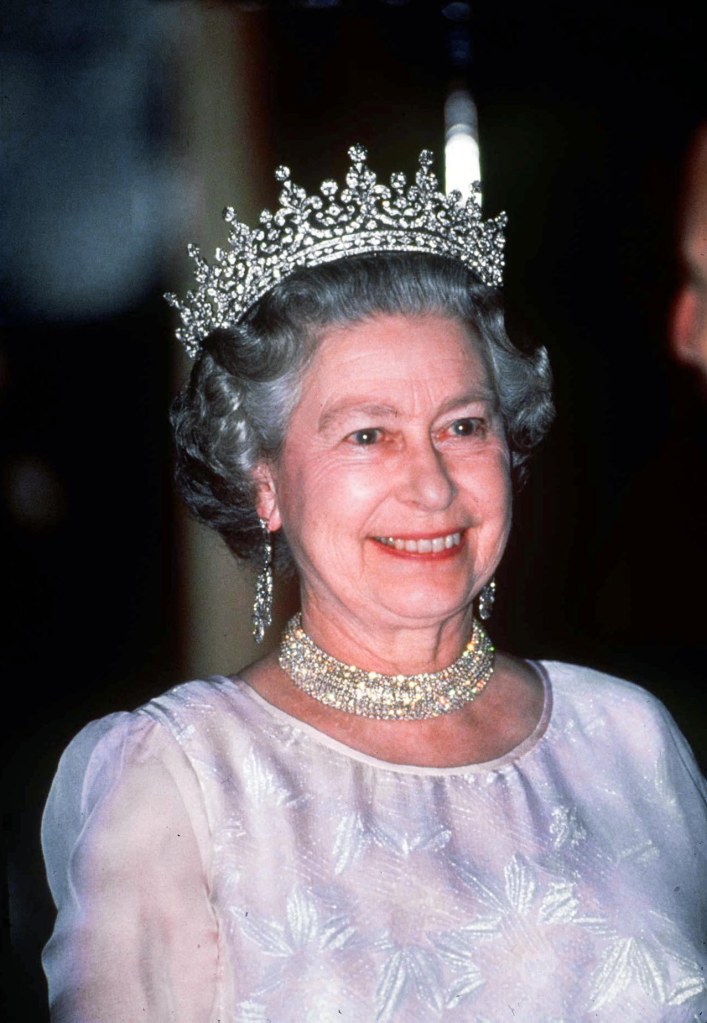 While the queen did not wear the tiara on her wedding day, she has regularly worn the piece throughout her reign and is seen wearing the tiara on certain issues of British and Commonwealth banknotes. 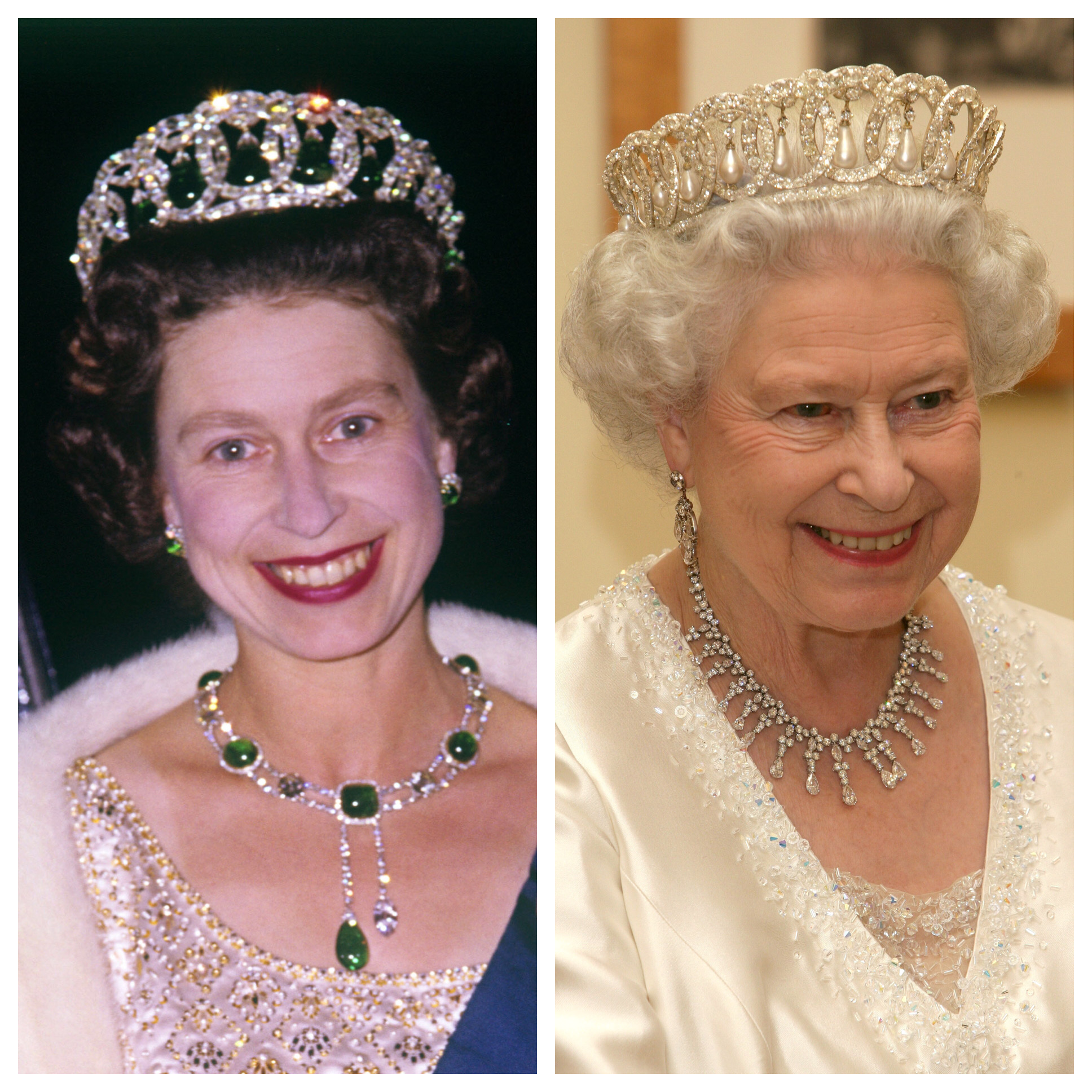 The Grand Duchess Vladimir Tiara is another of the queen’s most frequently worn pieces. The tiara was commissioned by the Duchess Vladimir in 1874 from the Romanov court jeweler, Bolin, and was smuggled out of the country after the duchess fled St. Petersburg during the Russian Revolution in 1918, according to Town & Country. 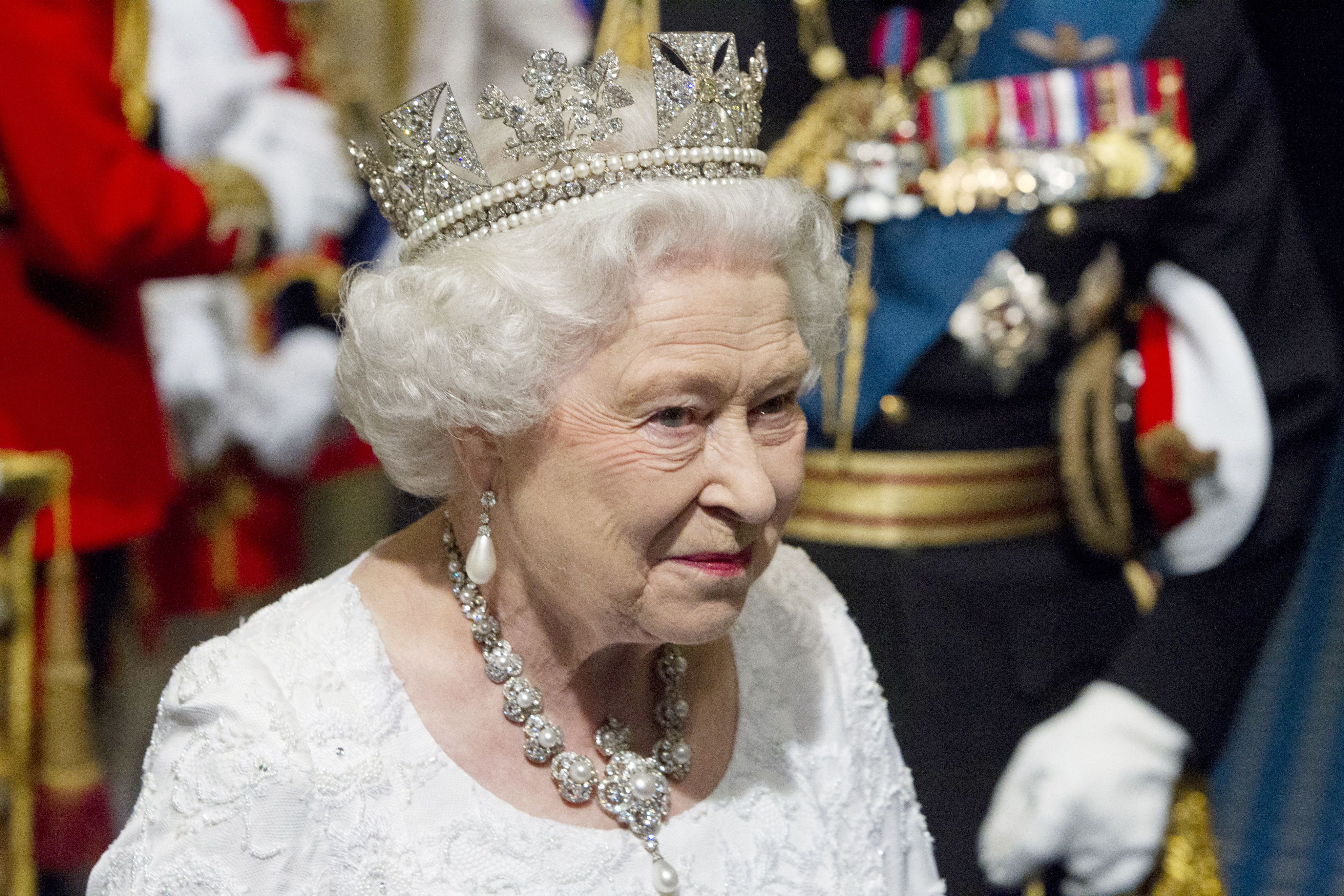 Queen Elizabeth II at the State Opening of Parliament in 2014.
Heathcliff O’Malley/Shutterstock

The State Diadem has been in the British royal family since 1821 when it was made for King George IV’s coronation. After his death the diadem was passed to Queen Adelaide, consort of King William IV, who made it tradition for female monarchs to wear the piece, according to the Royal Collection Trust.

The diadem was passed down to Queen Elizabeth, who wore the headpiece on the way to her coronation at Westminster Abbey in June 1953. The queen continues to wear the diadem on her way to and from every State Opening of Parliament.

The State Diadem is made with more than 1,000 diamonds — including a 4-carat yellow diamond at the center — and roughly 170 pearls. 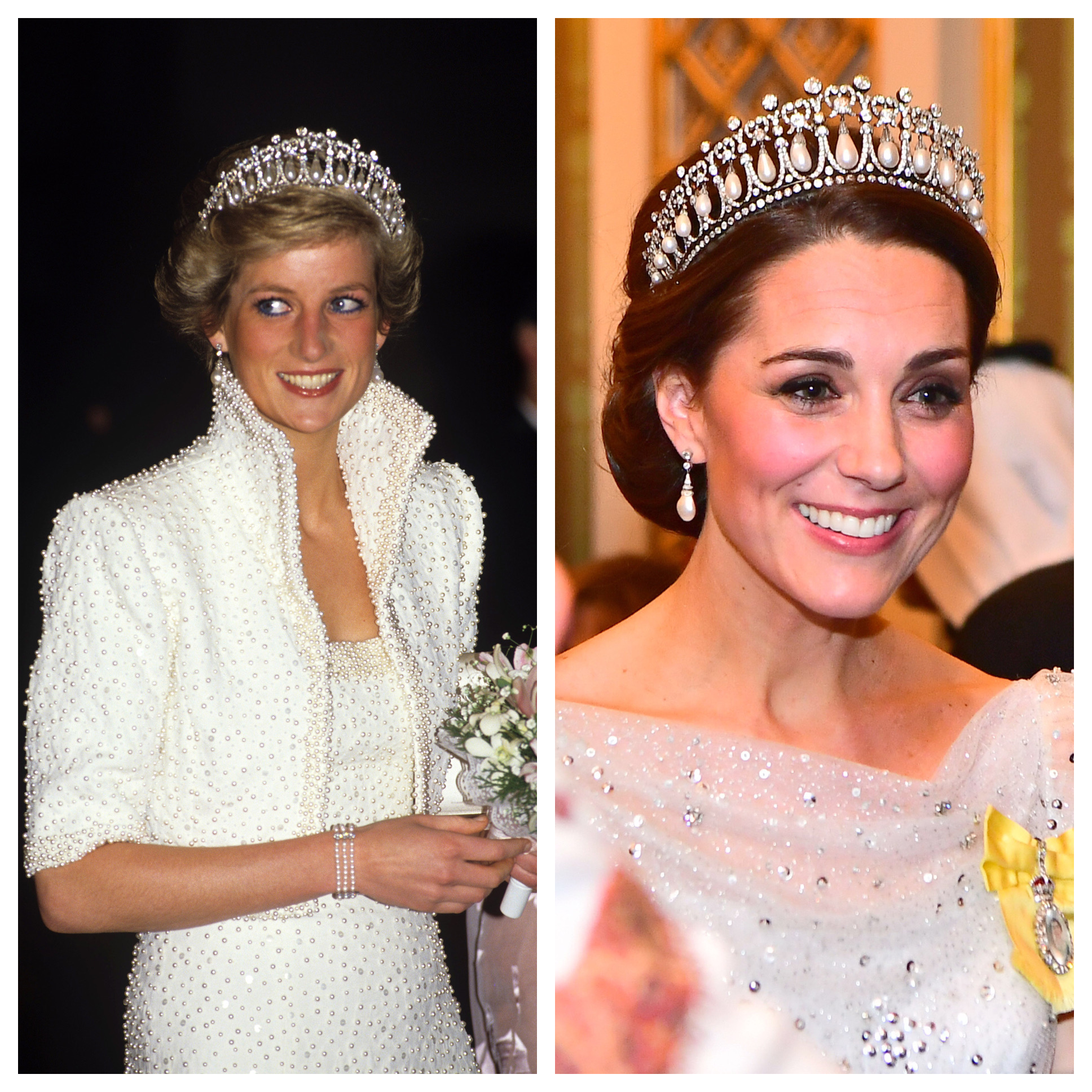 Princess Diana in 1989 and the Duchess of Cambridge in 2018.
REX/Shutterstock

Queen Mary commissioned the Lover’s Knot Tiara in 1913 to the House of Garrard, and the piece has since become one of the most recognizable tiaras of the British royal family. The tiara was often worn by the late Princess Diana and is frequently seen on the Duchess of Cambridge, Kate Middleton.

The tiara was created with 19 baroque pearls and rose-cut diamonds, which are set in a series of heart-shaped knots. 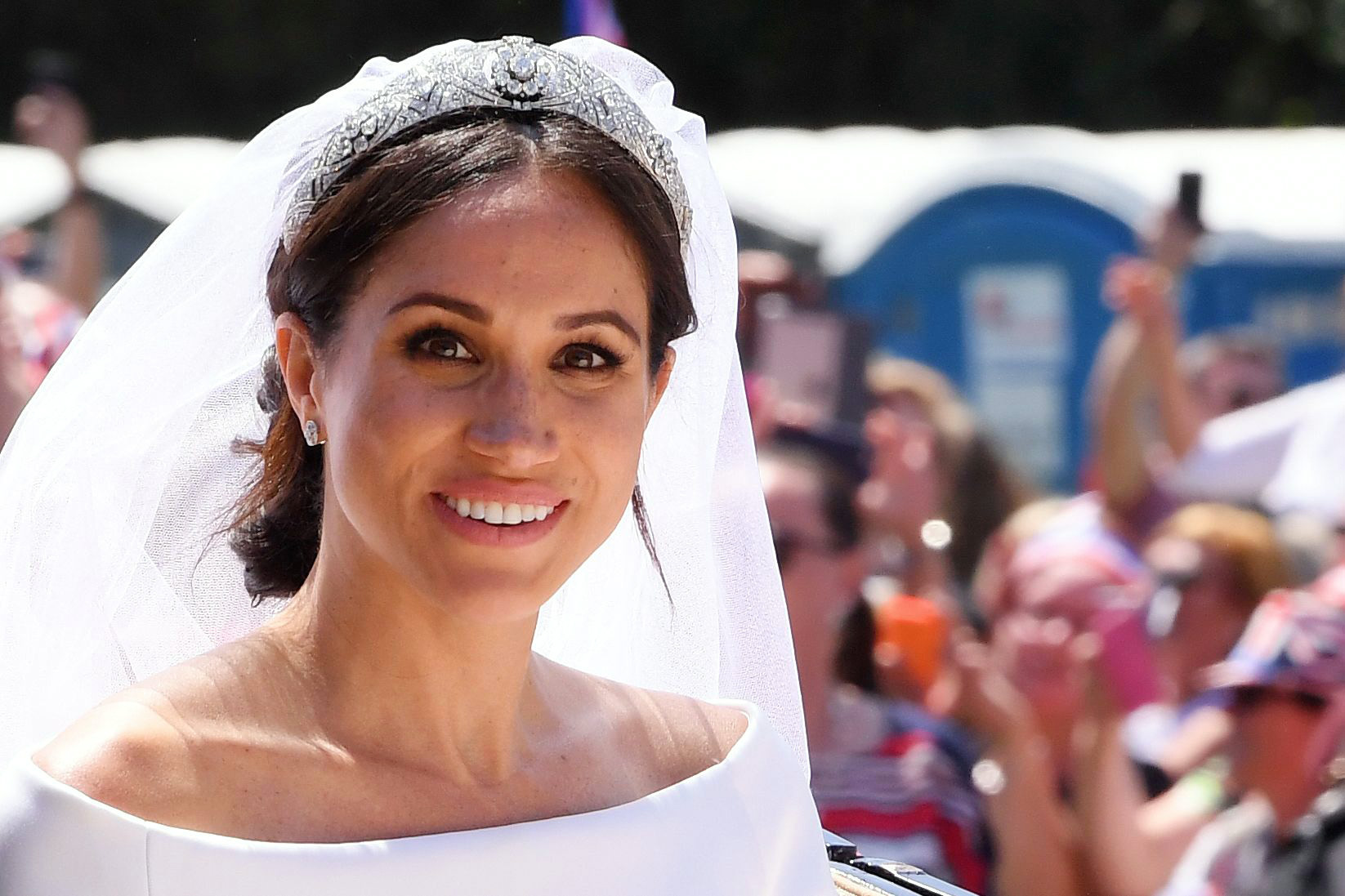 The Duchess of Sussex, Meghan Markle, at her royal wedding in 2018.
David Fisher/Shutterstock

Queen Mary’s Bandeau Tiara was created in 1932 from a brooch she received in 1893 by the County of Lincoln for her marriage to the future King George V. The tiara was designed with a flexible band of 11 sections with pavé-set diamonds. The center brooch includes 10 individual diamonds. Queen Elizabeth received the tiara when her grandmother died in 1953.

The queen lent the tiara to the Duchess of Sussex, Meghan Markle, for her wedding to Prince Harry in 2018. 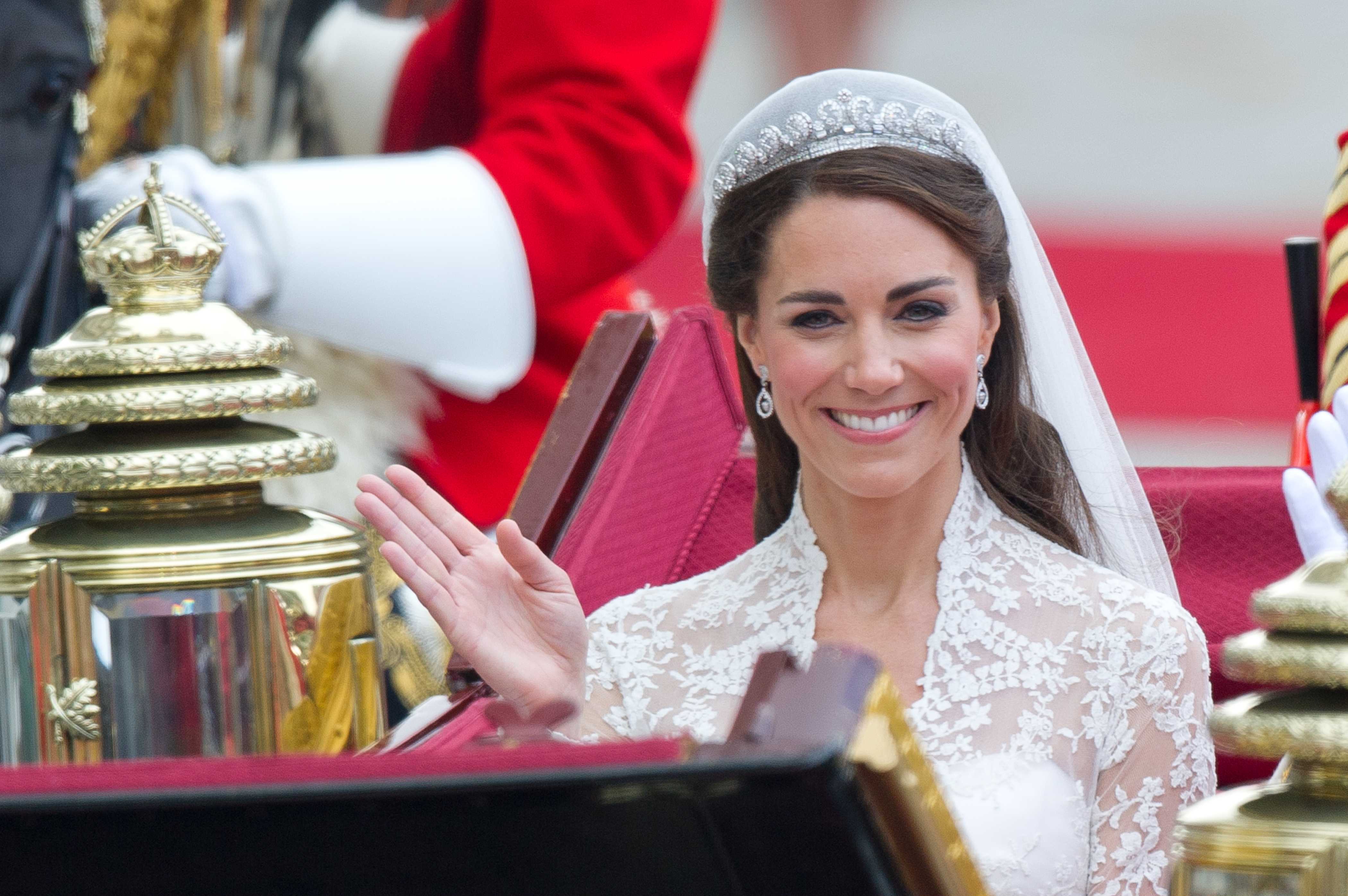 The Duchess of Cambridge, Kate Middleton, at her royal wedding in 2011.
Sipa/Shutterstock

King George VI, the queen’s father, commissioned the Cartier Halo Tiara in 1936 for his wife just shortly before he assumed the throne. She gifted the tiara to Queen Elizabeth on her 18th birthday. The tiara is set with 739 brilliant and 149 baton diamonds, according to the Royal Collection Trust.

The queen later lent the tiara to the Duchess of Cambridge, Kate Middleton, to wear at her wedding to Prince William in 2011. 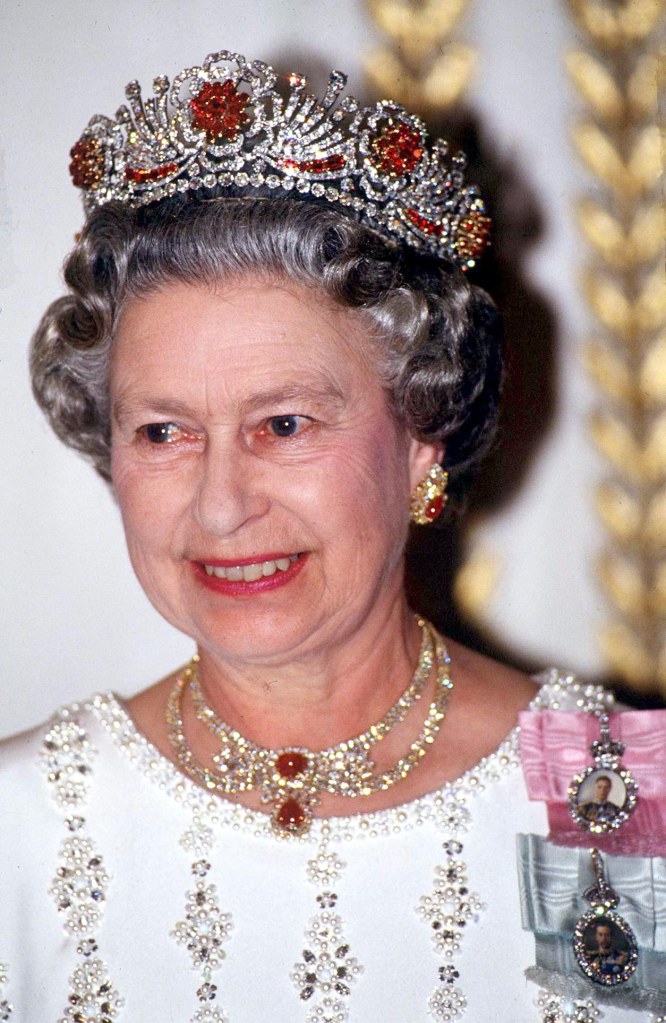 Queen Elizabeth commissioned her Burmese Ruby Tiara to the House of Garrard in 1973, using rubies that were given to her as a wedding gift by the people of Myanmar (formerly known as Burma).

The rubies are extremely rare and were banned in the U.S. starting in the early Aughts as part of President George W. Bush’s continued sanctions on Myanmar for its military regime. President Obama later lifted these sanctions and its subsequent ban on the rubies in 2016.

According to the House of Garrard, the 96 rubies in the tiara have a symbolic meaning as in Burmese culture, the stones are said to protect against evil and illnesses.

Given the supposed meaning, the queen made headlines last year when she wore the tiara during a state dinner with then-President Trump at Buckingham Palace. 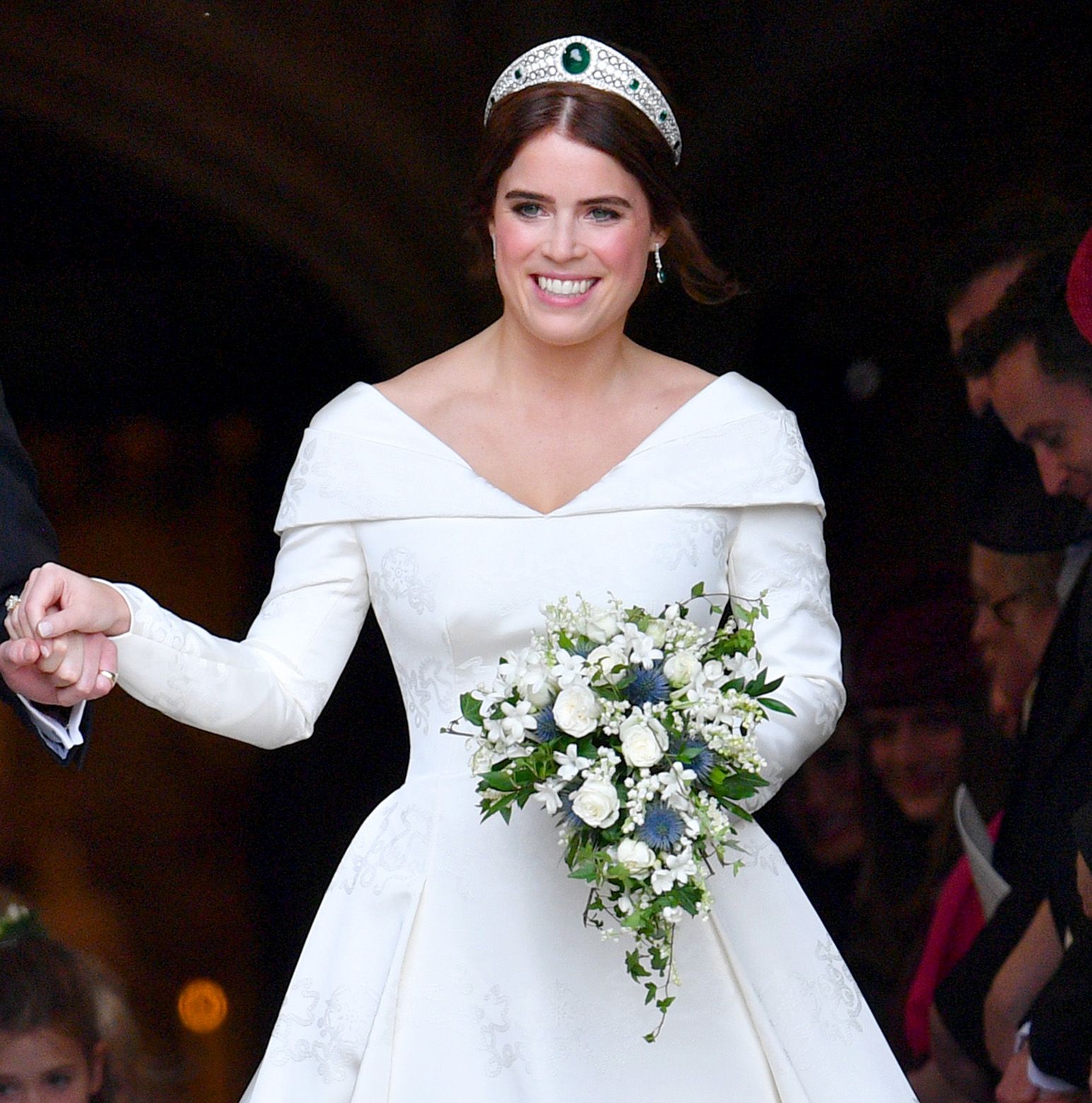 The Greville Emerald Kokoshnik Tiara was created in 1919 by Boucheron for Margaret Greville, a well-known socialite who left her jewels to Queen Elizabeth’s mother upon her death. The tiara takes its style from those popular in Russia’s Imperial Court in the early 19th century. It is made with rose-cut pavé diamonds set in platinum and features six emeralds, with the central stone sizing at 93.7 carats.

The Queen lent the tiara to her granddaughter Princess Eugenie for her royal wedding in 2018. 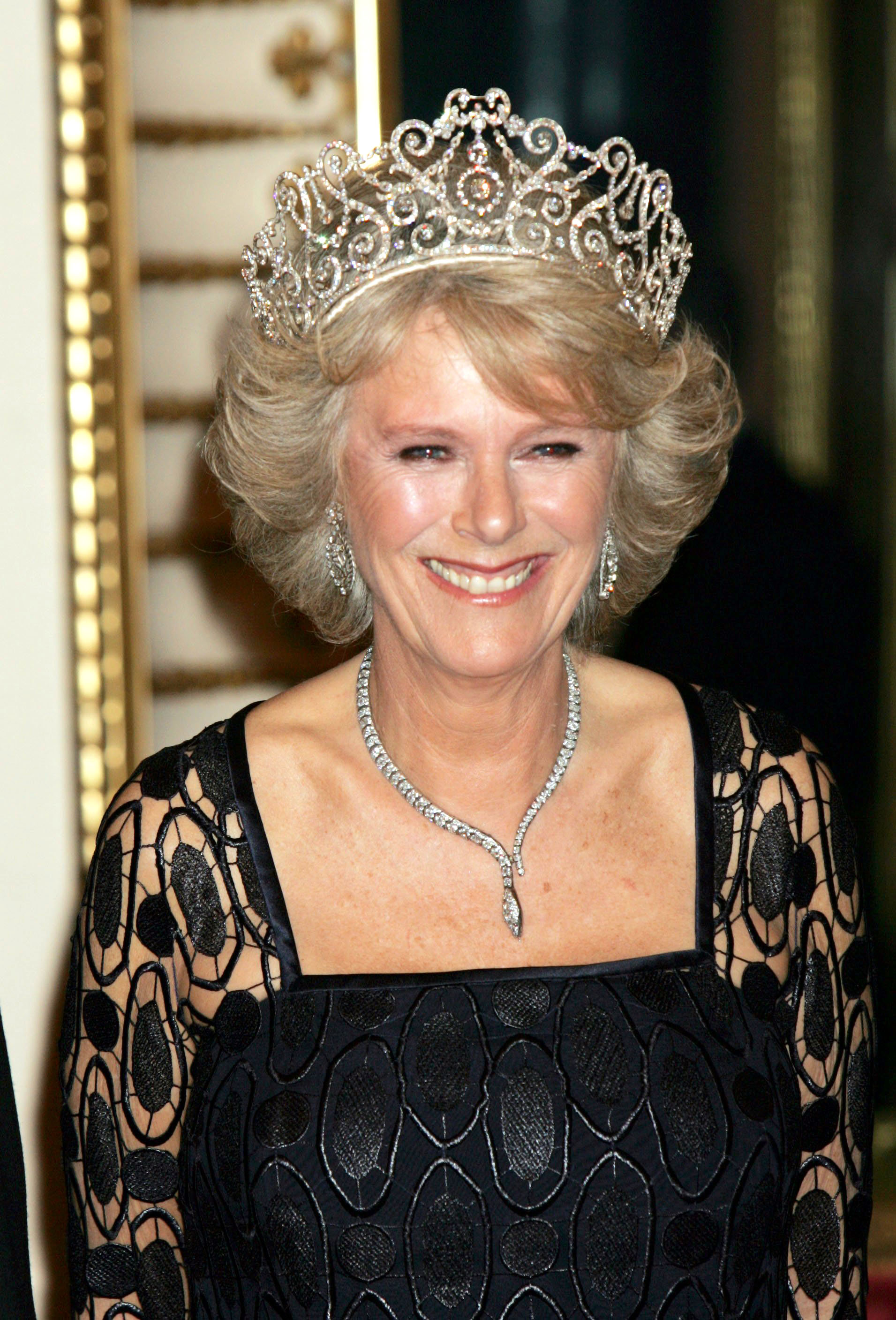 The Duchess of Cornwall, Camilla Parker Bowles, in 2005.
Shutterstock

The Delhi Durbar Tiara was made in 1911 for Queen Mary to wear for King George V’s succession as King Emperor of India. The tiara was originally set with 10 large emeralds, but they were later removed in 1922 for other uses.

Queen Elizabeth acquired the tiara after her mother’s death in 2002. She has since lent the tiara to her daughter-in-law, the Duchess of Cornwall, Camilla Parker Bowles. 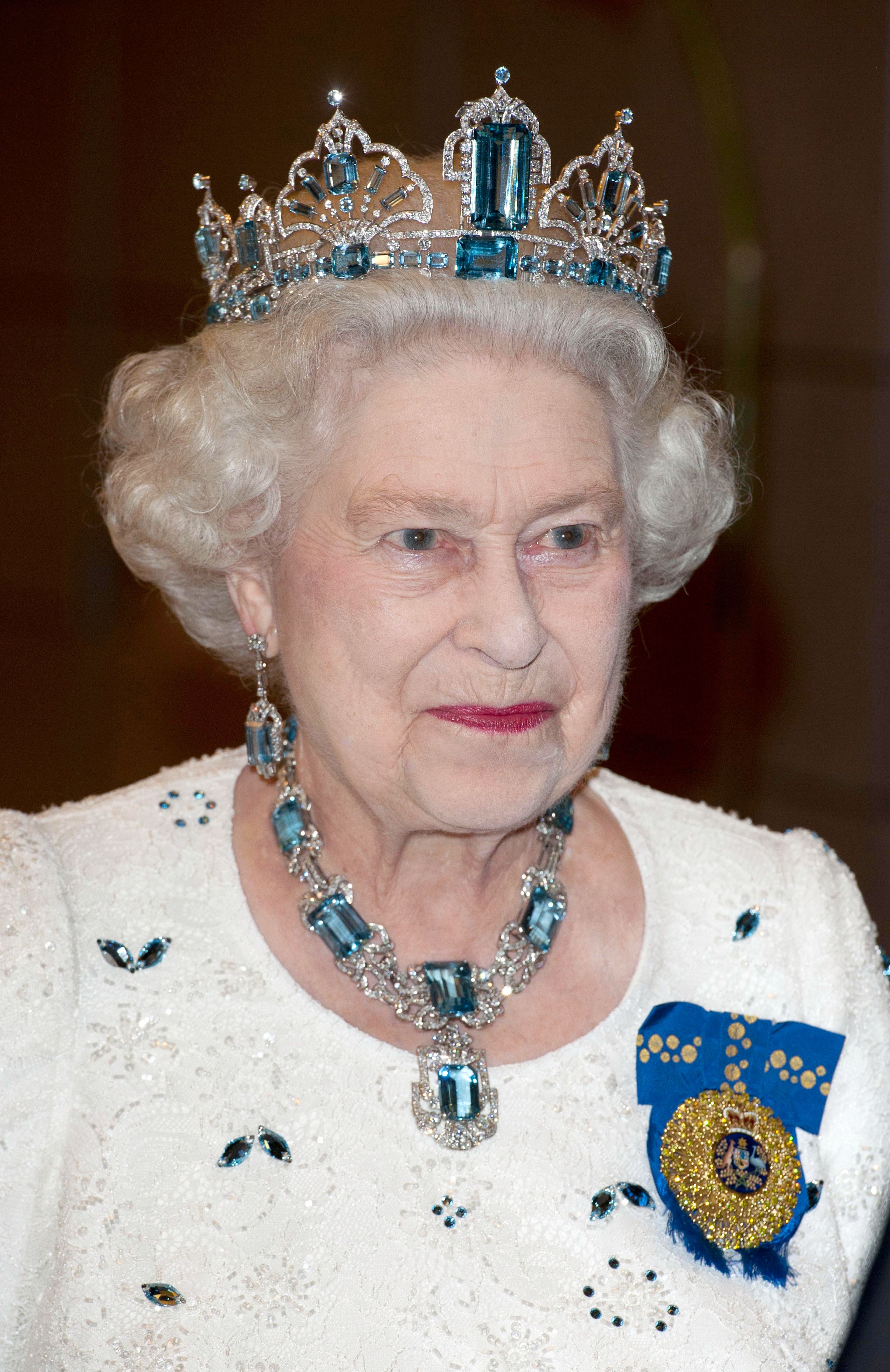 Queen Elizabeth commissioned her Brazilian Aquamarine Tiara from the House of Garrard to match a diamond and aquamarine earring and necklace set that the people of Brazil gifted her for her coronation in 1953. 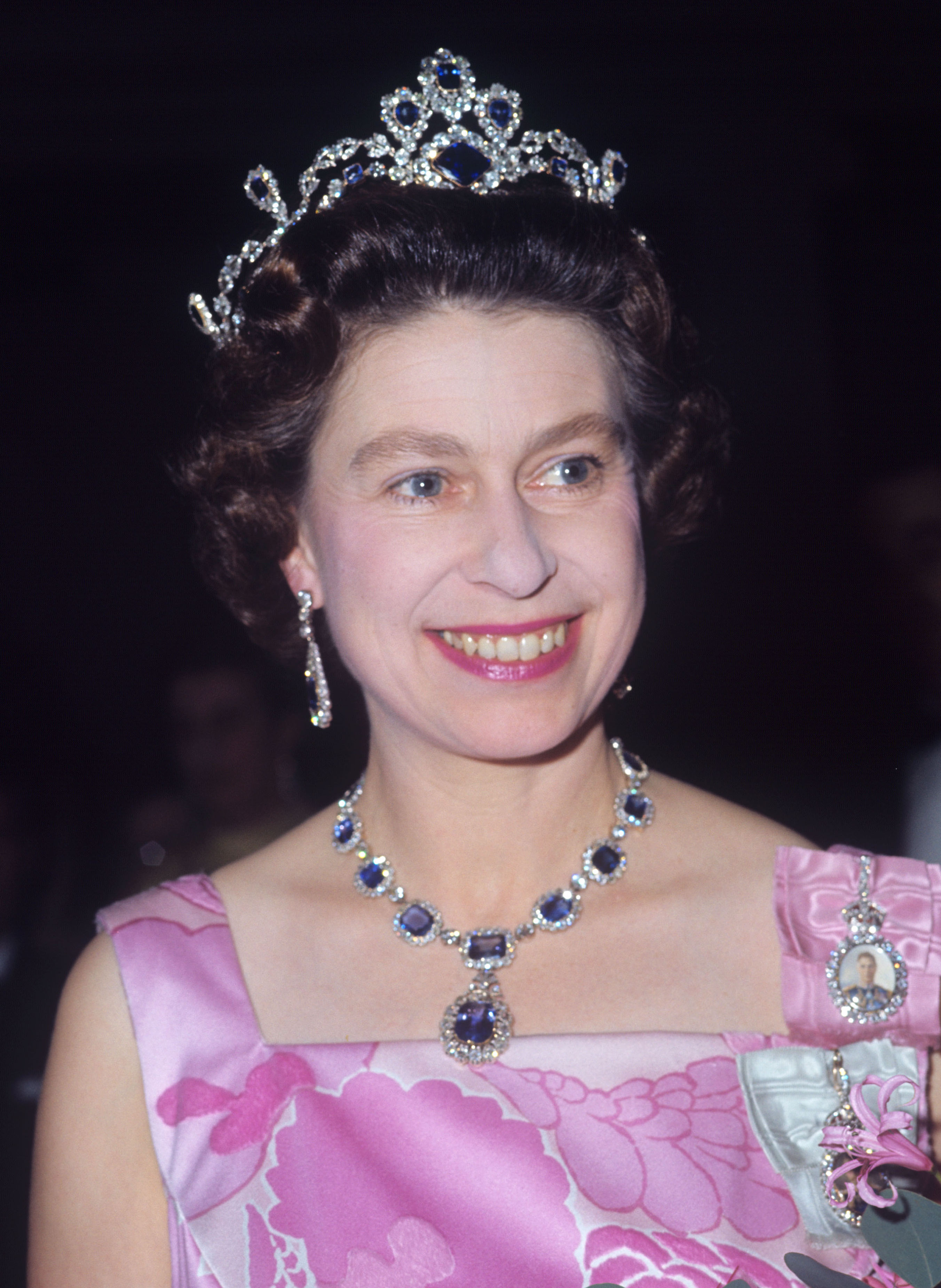 The queen commissioned her sapphire tiara in 1963 to match a set of diamond and sapphire earrings and a necklace given to her by her father for her wedding.